“Nujood Ali and the Fight Against Child Marriage,” forthcoming in 2015, will be Katherine’s second nonfiction YA book with Morgan Reynolds publishing.

“Real Courage: The Story of Harper Lee,” Katherine’s first YA biography, was published by Morgan Reynolds Publishing in 2013 as part of their World Writer’s series for YA readers.

Booklist called it “a fine new entry into an ever-solid series,” and School Library Journal calls it a “solid, accessible biography” that is “straightforward and engaging.” Please visit Amazon.com to purchase a copy, or visit the Morgan Reynolds website to purchase copies in bulk at a reduced price for use in school libraries or classrooms.

Reviewer Greg Borzo at Windy City Reviews wrote: “One of the best features of Real Courage is the way it places Lee in context. Throughout her highly readable book, Katherine Don refers to events that helped to form Lee’s character and views, as well as well as events that helped change attitudes toward poverty, education, and civil rights — events that shook the nation. In addition, Don does so in a way that will enthuse, encourage, and empower  young readers…”

Real Courage: The Story of Harper Lee, by Katherine Don 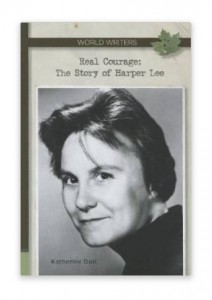 Between 2008 and 2010, Katherine was a contributing writer to six nonfiction books. Below is a short selection of her articles from these books.

Armchair Reader: The Book of Myths and Misconceptions
West Side Publishing, Apr. 2009

Armchair Reader: The Origins of Everything
West Side Publishing, Aug. 2009

Armchair Reader: All About Ohio
West Side Publishing, Jan. 2010